Driftwood from the Shannon to the Marne. (Paperback) 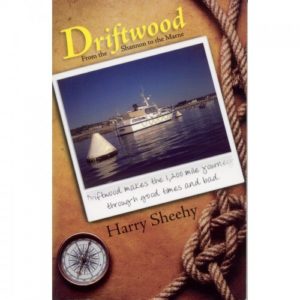 This is a hard copy paperback book.

Having no previous sea experience the crew head out of the River Shannon at Limerick and into the Atlantic Ocean. Then the adventure begins!

Driftwood: From the Shannon to the Marne – By Harry Sheehy

For more info and some extract see below.

This is the wonderful adventure story of a boat called Driftwood. It’s not a trip to the North Pole or a climb to the peak of Mount Everest. This is the every man’s adventure. It is within the of all of us to go on a voyage of this kind and it is that fact that makes Driftwood such a compelling read.

After spending three years planning this trip the author grabs the bull by the horns and with no real idea what he is doing he points the sharp end of his boat out into the Atlantic Ocean. Some days things go well and some days they don’t but every day is an adventure.

The story is told with humour and with humility The crew of Driftwood have to grapple with bad weather, engine trouble as well as the occasional bad pint of Guinness. After crossing the Celtic Sea and the Channel they enter the French Inland Waterways and the true adventure really begins.

Harry describes the characters he met along the way in his own gripping style.

“An adventure afloat with a gripping storyline that I read in one sitting” Dick Warner.

Extract:
At 8:55am on Monday, May 5, 2008, the gates in the sea lock at Limerick slowly opened. As they did they exposed the brine, that formidable barrier. Ahead lay the Shannon Estuary and the wild Atlantic Ocean beyond and somewhere out there, there is a country called France and my El Dorado.

Paul took photos from the shore, young girls waved from the bridge and I think I saw some of them wipe away a tear, and then one of them shouted: “Bring us back a parrot.” The band played ‘Oh Solo Mio’ and the Twelfth Battalion from Sarsfield Barracks gave us a gun salute, as the lads from The Munster Rugby team punched the air. “Good on ye lads,” they shouted. Ronan O’Gara stepped forward: “You will make the whole country proud lads.” Then Peter Stringer shoved his way to the front. “We love you guys, you’re heroes,” he yelled. Then we slipped out into the great blue yonder, waving to the crowds as we passed by.

There are no reviews yet.

Be the first to review “Driftwood from the Shannon to the Marne. (Paperback)” Cancel reply