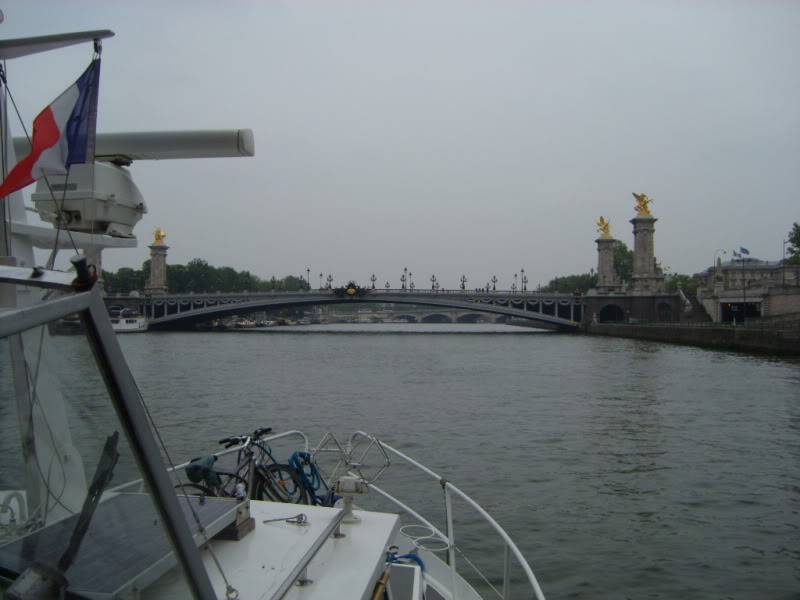 Time lapse video of a cruise on the Seine.

Our two sons Ben & David as well as Ben’s girlfriend Tara flew over to meet us in Paris and spend a few days on the boat. This was to celebrate Marion 50th but also David’s 21st. It was wonderful to see them and we had a great weekend. We took a trip from the Port de l’Arsanel on the Canal St Martin in the centre of Paris out onto the Seine and down as far as the Statue of Liberty (the original one!)

It is a wonderful trip that that requires a bit of care. It is imperative to keep out of the way of the passenger boats and the commercial barges. Usually this means just keeping well over to the right and making it easier for them to pass. It tends to be a bit lumpy with all the wash so the video below is a bit bouncy too.

We had the Driftwood in Port de L’Arsanel for a few days, which is right in the centre of Paris. I think it cost us about €40 a night and for that five of us. That’s got to be the cheapest accommodation in Paris. Marion wasn’t keen to go on the trip along the city section of the Seine so she settled for a shopping trip instead, wasn’t that thoughtful of her!

Meanwhile Ben & Tars as well as David and myself  took Driftwood out for a spin. We set up a camcorder before hand and that turned out to be one of my better ideas.

I think Paris is a beautiful city no matter where you view it from but from the water it’s another experience altogether. No don’t get me wrong I wasn’t meandering up the river without a care in the world. There are traffic lights, even a one way system in parts and just about everyone else on the river has priority over you. So keeping out of the way is key.

In hindsight this weekend was a bit of a turning point for us. We missed out two boys before this visit but seeing them again just made things worse. When they were go back home we cried like the rain and we really missed them. It certainly put a damper on or mood for quite a while. But that’s traveling, it comes with the territory and you have got to move on.