The Seine is certainly a beautiful river, it’s especially beautiful south of Paris. Moorings are not very plentiful so you need to plan ahead that said it’s well worth the effort. The Canal de loing joins the Seine at St Mammes here the pace of life gets more relaxed. Over a few days we meandered south in so much as one can meander when you have to keep between two hedges.

On Thursday 17-Oct my Mum & Dad arrived out to join us on the Canal de Loing at Montagis (pronounced mont a gee) and to stay for a few days. This is a superb stop and the town has several nice Cafes and shops. The trip through the town centre is a wonderful experience with many of the seven bridges are draped in brightly coloured flowers.

We parked up dads’ car and headed south towards Montbouy (not going to tell ye how to pronounce that!) which is a very small village with a nice mooring which with free electricity too. My da who is 75 now loves the boat and it wouldn’t be here in France only for him. It was a treat for me to let him experience the warm French canals which to a large extent is the fruits of his labour because he was my right hand man when we sailed here. 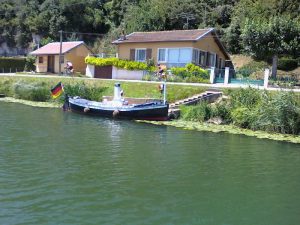 The next day we moved to Chatillon-Coligny which cannot be pronounced by anyone other than a true 3rd generation French Man. Like Montbouy we again had free mooring with free electricity.

On Sun13-Oct Mum & Dad headed away and it was a sad parting. Now we really feel like we are alone. Just the two of us, a small boat and the world.

By Monday 14 we were in Rogny and the weather had turned decidedly wintery. The temperature was down to low/mid teens and it felt like home. In Rogny there is a flight of seven locks. They are disused now and they were declared a national monument sometime in the 1980’s. They make a very interesting sight but there’s not much else in Rogny.

Thurs 16-Oct we are in Ouzouer-sur-Trezee which is absolutely unpronounceable. Again moorings and electricity are free although a notice on the bank says that you are welcome to stay for up to 48 hours, which I suppose is fair enough. The weather is picking up again but today I have to get my tool kit out and fit the heating system for the winter. I had brought it home to get it repaired on a Ryanair flight last June which was interesting to say the least.

Dad had brought it back out with him along with tonnes of our bags and baggage. This is a job that I have not been looking foreword too but I better get it over with.