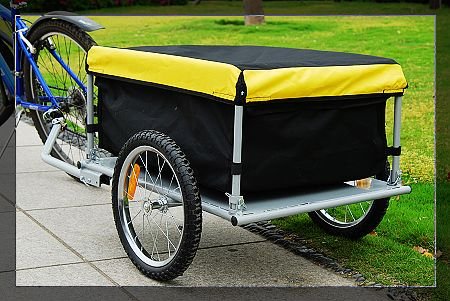 Monsieur and my bicycle trailer.

We have been in Meaux for over a week now waiting for a bicycle trailer! That is very out of character for us as we are normally randomly ambling around the canals & rivers. However there is a reason for this, because all French filling stations are strategically situated away from waterways boaters have to walk for miles with jerrycans of diesel. This forces them to buy the overpriced diesel from marinas where the diesel has been stored in a damp underground tank since last season. I’m

fussy about my diesel and too crafty to pay the 20% to 30% marina markup so trekking jerrycans is the only other option. And to this end I have devised a plan, and here it is…I’ll go to a French bicycle shop and buy a small bicycle trailer, a cargo type of bicycle trailer. Simple ah?? No it’s not simple because this is France.

So off I go to one of several bicycle shops in Meaux. Monsieur behind the counter does not have a bike trailer in stock but says he can have one in by Wednesday. Given that this was a Friday we decide to order it and stay put till it arrives.

Tuesdays are normally alright except between 12 and 3pm when most shops will close at some stage for a long lunch break. So on Wednesday I head up to the shop with my bike anticipating it to grow into an articulated bicycle by the addition of a new bicycle trailer.

Monsieur behind the counter has thinning hair and hides it with a comb-over. And to give the impression of more hair than he really has he adds large quantities bicycle grease. The effect is uniquely him. He is a slim build and has the appearance of a village undertaker, only not so joyous. The only word of English that he has is ‘No’ he animates this with arm and shoulder movements but it’s all very negative.

On Thursday I try again and this time I persuade monsieur to ring to make enquiries. Monsieur rings and a voice on the other end of the line makes noises back. The voice is even more pessimistic than monsieur. Eventually from what I can understand the voice tells monsieur that it should arrive on Friday.

On Friday we go through a similar process as we did on Thursday and Wednesday only without the help of the voice on the line but with the same outcome. Today is Saturday and by now I have sourced a trailer on ebay for 1/3 of the price with a guaranteed 72 hour delivery to anywhere in France. But I feel a loyalty to monsieur who desperately needs cheering up and a sale, even a belated one could do the trick.

So once again I take my bike and head to the bike shop. This time there are even more arm and shoulder movements which as in keeping with the pattern is all very negative. From what I can gather it’s never going to arrive so we cancel the order and I log into eBay to make the purchase.

Tomorrow we will untie and head off again. We have asked for the bicycle trailer from ebay to be delivered to Epernay and we should get there in about a week or so. Now I better get some jerrycans and trek to the filling station which is just over the horizon.