After over 1,300 Klm of French canals and Rivers and over 750 locks we are nearing our winter moorings in Roanne.

Well do you know what? this year has been a fantastic experience we have cruised all over central France, up the Rhine as far as Basel in Switzerland and lots and lots in-between. Sadly now we are in the first week of October and we

are nearing the end of another boating season. One of the best things about boating is when you enter a harbour and meet up with friends you have met before (or indeed friends that you have never met before). The converse is also true when you have to say goodbye to good friends. That just seems to be part of any nomadic lifestyle.

We expect to reach Roanne in about a week’s time. Then it will be a matter of preparing the boat for the cold winter ahead. Engines need to be winterised batteries topped up, and domestic water tanks drained. Then on 01-Nov-10 we will be flying to Dublin to spend a week with family and friends before heading up the road to Belfast where we will be house-sitting for five months. 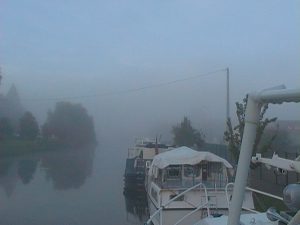 Dawn on the Roanne canal

That should be an experience and I will keep this site updated with all that happens. We haven’t seen the house yet but I understand that it is not too far from Belfast Lough so we can go for walks and do some boat watching! As for now we are at a mooring in a small town near Montceau les Mines, called Genelard. We will move again in the morning.

We befriended a couple on a boat in Meaux last May and we met them again here in Genelard, we call them the T’s. We call them that because he is called Terry and she is too. And if it wasn’t for bad luck they would have no luck at all! So I made up this little ditty for them…

There’s lots to go wrong, when you’re boating along,
the canals in a wide narrow boat,

There’s dials to watch, and jobs to botch,
when you’re trying to keep her afloat.

When your thruster burns out, it’s a worry no doubt,
cos the motor was burnt like toast.

A week spent in Meaux, cos delivery’s are slow,
till a new one arrived in the post.

Then the alternator began jerking, and then it stopped working,
it’s becoming a bit of a joke.

Then they met a barge, the size was quite large,
and the skipper was a right bloody bloke.

Then claiming right of way, It’s an old bargeman’s cliché,
and a right dent he put in the bow.

Well Terry went mad, it was really quite sad,
and the skipper never raised an eyebrow.

But it all got worse, when he got stuck in reverse,
and he hit the bank with a shudder.

The cable had broke, the boat did a back-stroke,
and managed to mangle the rudder.

Though greatly shook, Terry took a quick look,
in the engine room under the floor.

There was frayed wire, a situation quite dire,
But he said “Worse things happen in War”

Now the rudder is mended, and disaster suspended,
and he’ll be on his way quite soon.

Just a diver to refit, and our hero won’t quit,
to mishaps he has become quite immune.

So Terry’s not vexed, and we wait for a text,
to say that he’s motoring and feeling plucky.

But we just better hope, that he’s brought a towrope,
cos we know that he’s not very lucky.