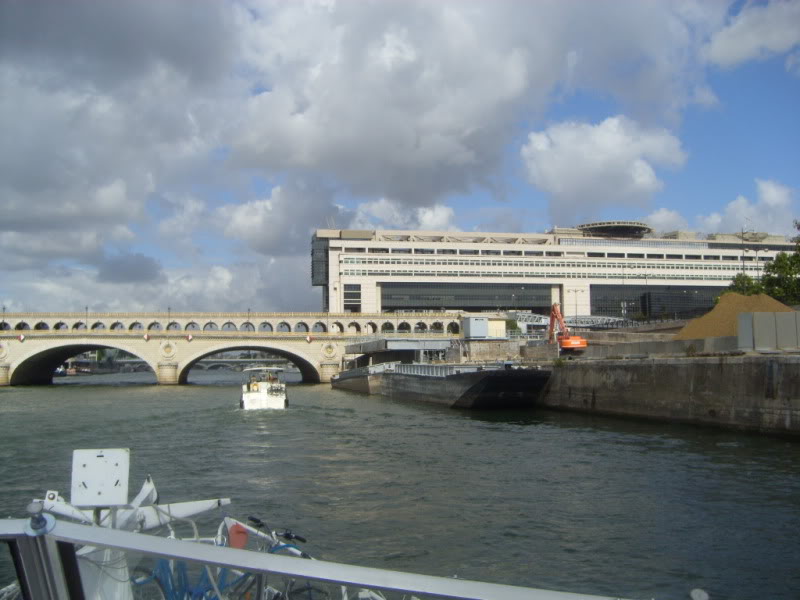 Well we have had a few experiences since our last report, some good, some not so good. Firstly we arrived into Paris. What an experience that was, I have some video of it and I will upload it as soon as I get a fast conection. We stayed in the Port-Arsenal which is just beside the Plass de Basteel in the centre of Paris. We did the open top bus thing and

spent a fortune on a small snack on the Champs Elasyesee. But that is what Paris is about. What a beautiful city. On Monday 7-Sep-09 we left Paris to head south along the Seine to the Canal le Loing.

This is where things got a bit hairy. The locks on the Seine are enormous and there is a very strict procedure to be followed when you use them. Firstly you have to give right of way to anything that looks like it may be commercial. Then the lock keeper who is high up in a control tower will give you the green light (that’s literally a green light!)
When we arrived at the first lock which has a rise of 2.6 meters there was no commercial traffic about and so the green light came on and we sailed into a lock big enough to hold a football stadium. We tied up close to the bottom gates to avoid the turbulence. There was a lot of garble on the VHF.
When they talk in French on the VHF it’s my policy to ignore them. Can’t be important, probably wishing me a pleasant trip or something. Then a frightening sight appears below the lock. A 5,000 tonne barge well two 2,500 tonners tied end to end to be exact but with that many tonnes there is no need to be exact, its not Ryanair baggage we’re weighing here.

Trouble is we are in his way and there is nowhere to go. Mar starts saying the
Act of Contrission and is imploring intercession from holy St Joseph, St Bridget, and St Patrick too. All the time with her hands over her eyes. I try to guage if there is enough room for him to pass into the lock beside us but it’s too close to call. As the barge starts to pass the lower gates I can feel the pull of the water it’s displacing and I pull on our ropes with all the strength I can muster. 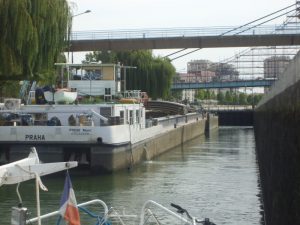 From where I’m standing I cant see if he is going to miss us or slice us open like a can of beans. I ask Mar to check how close he is going to be but it’s no use, she is busy talking to Padre Peo now. The barge passes in with about two feet to spare which isn’t much when it’s only St Bridget between you and a watery death.

If the skipper of ‘Praha’ ever reads this I have to say this. I take my hat off to you sir, you know how to handle that machine!

Having survived the first of seven Seine locks we continued on and let the big barge go ahead of us. We had to share four more locks but always with smaller barges and even though they tended to keep their engines in gear it was definately less life threatening than that big barge.