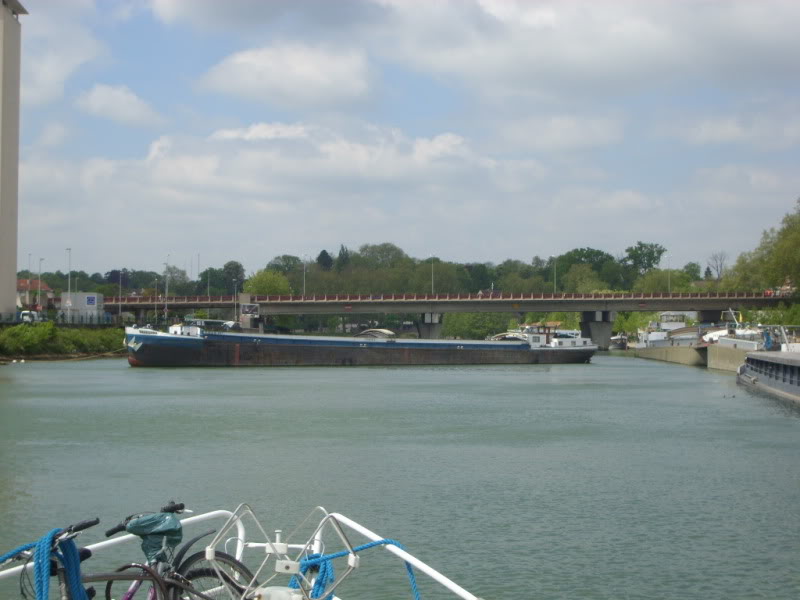 What a busy week, the barge men have gone on strike and Marion will be 50 this week.

Certainly a lot has been happening even with the strike aside. Firstly the locks keep growing in size. On the southern end of the Nivernais the locks were just 30 meters long. From the summit level north they were 38 meters long. Then when we reached Auxerre they grew to 108 meters.

But even those big locks are dwarfed by the Seine locks which are 180 meters long. They take a bit of getting used to and they can be a bit intimidating at first.

The bargemen in France are blocking some strategic points on the rivers in a growing dispute over the rate that they get for carrying freight. The barge men in fairness to them do seem to have a genuine case. The pics below were taken at Melun.

Here we feared that our journey had come to an end. We tied up to one of the barges and I went off to talk to them. You see This was the eve of Marion’s 50th birthday and we were hoping to get to Paris to celebrate it. So I took Marion’s passport with me to verify my case. I fully empathise with the Barge men and I also believe that all boaters should stick together so I wasn’t prepared to try to sneak through their blockade. I was only prepared to pass the blockade with their consent. Not that it would have been possible to get through without it anyway!

After much consultation with several bargemen in a language I know little of I found myself talking to the three top men in this particular blockade. (There are many more all over France as I write this) Then they agreed to allow us to pass. Big barges fired up their engines and moved aside and as we passed by they all came out on deck and shouted “Bon Anniversair” to Marion. I have to say it was an emotive moment and I do hope that they are successful in their dispute even if it does restrict us on the river.

The next day in Paris where we had expected to meet another blockade we were taken back by the number of barges involved. Immediately it was apparent that this was not going to be as simple to pass as Melun. Even though I knew it was hardly worth trying we rafted up to the barges as before and with Mar’s passport in hand I tried the same negotiating tack. I have to say that they gave me a good hearing and even arranged for an interpreter but sadly the answer was as we had expected.

There was however a glimmer of hope. “Stay rafted off us and maybe at 4pm there will be an announcement” We waited till 4pm but there was no news of a breakthrough in the dispute so we conceded defeat and untied the boat (which was rafted six barged out from the shore in a precarious manner so getting ashore was out of the question) and headed to a mooring about six miles outside Paris in Joinville le Pont.

Here we got a good mooring and celebrated Marion’s birthday in a local restaurant followed by a few in O’Sullivan’s Irish Bar.